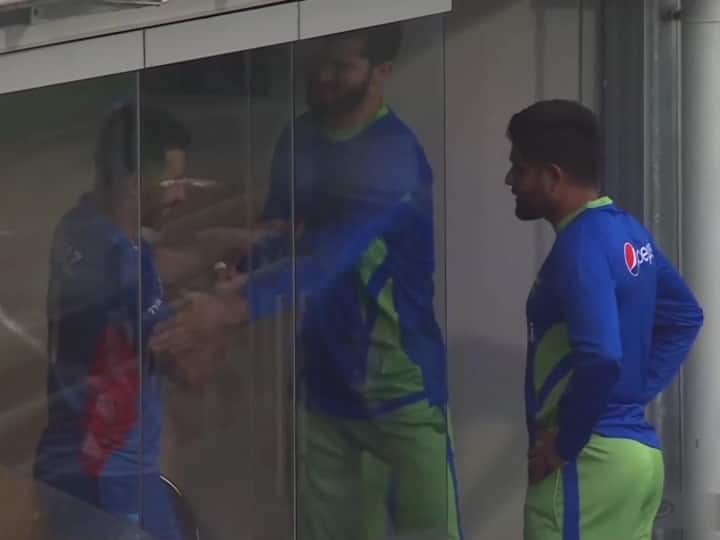 Babar Azam And Shaheen Afridi: Afghanistan played a warm-up match against Pakistan in the T20 World Cup. However, this match could not be played completely due to rain and it had to be cancelled. Afghanistan team scored 154 runs in this match. In this match, Pakistan fast bowler Shaheen Afridi bowled brilliantly and achieved 2 successes in his spell of 4 overs. At the same time, he dismissed Afghanistan batsman Rahmanullah Gurbaz by bowling such a dangerous yorker that Gurbaz’s leg got injured.

Gurbaz got injured on Shaheen’s ball
Pakistan’s fast bowler Shaheen Afridi, returning from injury, had bowled a deadly yorker on the fourth ball of his first over, which was dismissed as well as injured Gurbaz’s leg.

At the same time, after this match, Pakistan captain Babar Azam and Shaheen Afrid, showing great sportsmanship, reached the Afghan dressing room to know Gurbaz’s condition. Shaheen and Babar reached the dressing room of Afghanistan and took care of Rahmunallah Gurbaz himself. Now this photo of Babar Azam and Shaheen is becoming increasingly viral on social media. Fans are very fond of this gesture of Babar and Shaheen and fans are praising it very much.

Board gave important update on Gurbaz’s injury
While issuing an update on Rahmanullah Gurbaz’s injury, the Afghanistan Cricket Board said that Rahmanullah Gurbaz was sent for a scan after he injured his left leg during the practice match against Pakistan. The team doctor says that there is no fracture and the result is clear. His injury will be tested over the next two days and he is expected to be available for Sunday’s match against England.

IND vs PAK: Babar Azam will bat with which bat in front of Team India, know how to select it