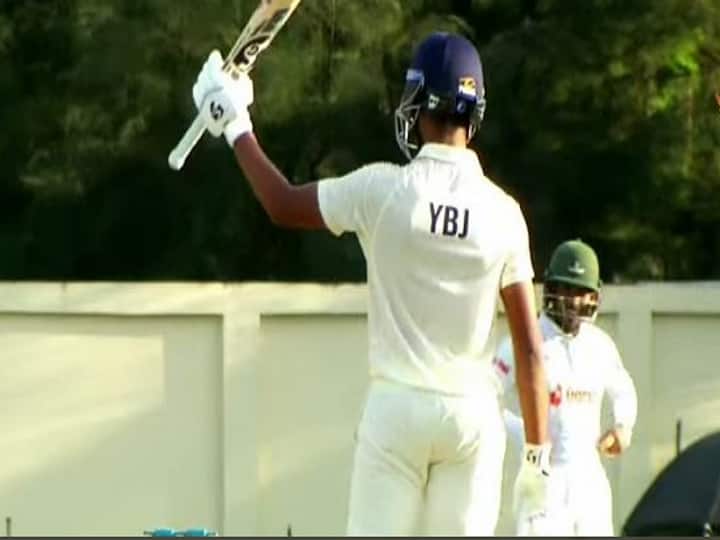 India-A vs Bangladesh-A Highlights Day 1: India dominated the first day of the four-day unofficial Test between India A and Bangladesh A at the Sheikh Kamal International Cricket Stadium. Guessing the conditions, India won the toss and fielded first. Bangladesh players could not play openly in front of Indian team’s fast bowlers. The whole team got stacked on 112 runs. For India, Saurabh Kumar took maximum four wickets. After the end of the first day’s play, India A scored 120 runs without losing a wicket. Team India’s batsman Yashasvi Jaiswal remained unbeaten on 61 and Abhimanyu Ishwar scored 53 runs.

Batting first in this match, the Bangladesh team could not stand in front of the Indian bowlers. The condition of Bangladesh batsmen is you keep on coming. Only Mosaddek Hossain could struggle from the side of the visiting team. He scored 63 runs. While Najmul Hussain Shanto scored 19 and Taijul Islam scored 12 runs. Apart from these three players, none of the Bangladeshi batsmen could score double figures. While bowling well for India A, Saurabh Kumar took maximum 4 wickets. Apart from them, Navdeep San and Mukesh Kumar were successful in taking 3 wickets while one wicket went to the account of Atit Seth. In this way, Bangladesh A got reduced to 112 runs in their first innings.

India A off to a bang

After bundling Bangladesh cheaply, India A batsmen did aggressive batting. Yashasvi Jaiswal and captain Abhimanyu Easwaran, who came to start the innings, attacked the host bowlers fiercely. During this, Yashasvi was a bit more aggressive. When the first day’s play ended, Yashasvi returned unbeaten after scoring 61 runs off 106 balls and Abhinyu 53 off 111 balls. In this way, at the end of the first day’s play, India scored 120 runs without losing a wicket. Now Team India is ahead by 8 runs on the basis of Bangladesh’s first innings.