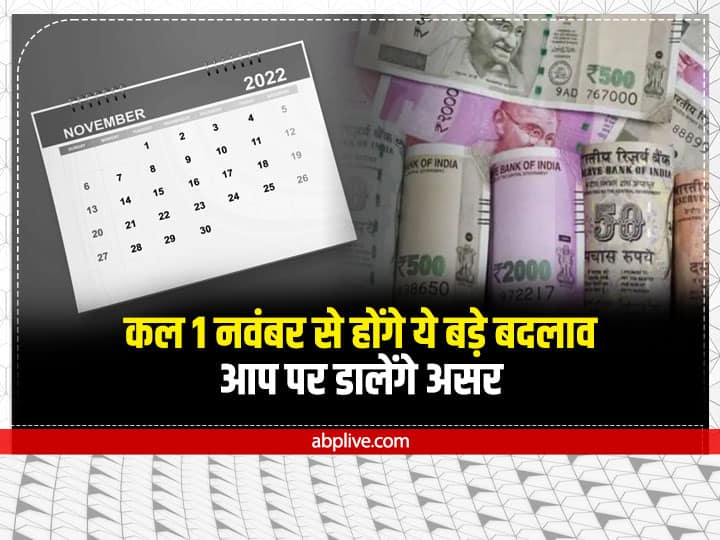 Changes from 1 November: The month of November is going to start from tomorrow and this 11th month of the year will start with many changes in your life. From economic aspects to normal life, there are some rules that will change from tomorrow and you need to know about them. In these, from the rules of PM Kisan Samman Nidhi to car seat belts and free slips in AIIMS OPD, there are such rules which can have a deep impact on your pocket and health.

These changes happened in PM Kisan Samman Nidhi Yojana
For the beneficiary farmers of Pradhan Mantri Kisan Samman Nidhi Yojana, a big change is going to happen from tomorrow i.e. from November 1. Under this, now the beneficiary farmers will also have to give the registered mobile number to check their status on the PM Kisan portal. Earlier, those farmers were able to check their status through Aadhaar number, but from tomorrow this will not happen.

Free slip in AIIMS OPD
In the OPD of All India Institute of Medical Science (AIIMS), now money will not have to be spent for getting the slip cut. From tomorrow, November 1, the fee of Rs 10 charged for getting slip cut in AIIMS has been waived off. This will benefit millions of patients of the country. At the same time, the Rs 300 which was being charged in the name of convenience fee has also been waived off.

Code will be mandatory for GST Return
There will also be a change in the GST rules from November 1, and from tomorrow, taxpayers with a turnover of less than Rs 5 crore will also have to give a 4-digit HSN code while filing the return.
Earlier this code used to be of 2 numbers but now it will be of 4 digits.

train time table will change
Earlier, the new timetable of trains was going to be implemented from October 1, but now it will be implemented from November 1 tomorrow. According to reports, from November 1, changes can be seen in the timings of many trains including superfast and Rajdhani trains, so if you are going to travel by train tomorrow or after that, then go out of the house only after checking the time of your train.

It is mandatory to wear seat belt on the back seat in Mumbai.
From tomorrow, it will be mandatory for the passengers sitting on the back seat of four wheelers plying on the roads of Mumbai to wear a seat belt. After November 1, seat belts will be mandatory for all drivers and passengers traveling in four wheelers on the roads of Mumbai. For information, it is being told here that strict action will be taken against the violators under section 194 (b) (1) of the Motor Vehicles (Amendment) Act.

Gold Silver Rate: Gold prices decreased in some cities, know what are the gold rates in your city today