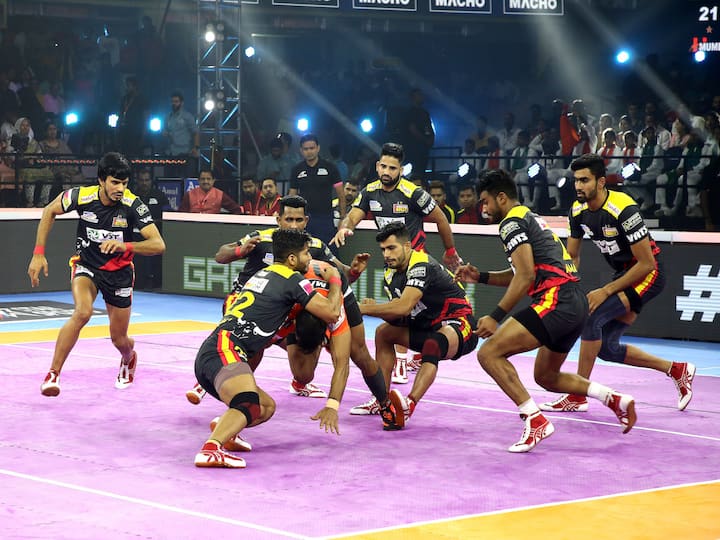 U Mumba vs Bengaluru Bulls: In the 33rd match of Pro Kabaddi League (PKL) 2022, Bengaluru Bulls made a strong performance and won a spectacular victory against U Mumba. In the first half itself, Bengaluru was all out twice and was behind by 14 points. However, in the second half, Bengaluru has registered this victory by all outing Mumba thrice. This is the second consecutive win for Bengaluru. They have defeated Mumba by a margin of 42-32.

U Mumba dominated in the first half

U Mumba started the match with a bang. In the second raid itself, Guman Singh took three touch points and put the first super raid of the match. After this raid, Bengaluru could not make a comeback and were all out in the sixth minute. Mumba had taken a 10-3 lead in the match. After this all out, before Bengaluru could recover, he had reached the same position again. Bengaluru was all out again in the 14th minute and now Mumba was ahead 21-5.

By the end of the first half, Mumba had taken a 24-10 lead. Mumba’s defense took eight tackle points, but Bengaluru’s defense disappointed, scoring only two tackle points. The only good thing for Bangalore was that Bharat had scored five points in the raiding. Guman Singh got seven points for Mumba.

At the beginning of the second half, Bharat got Mumba all out in the same raid, dismissing three defenders. Despite this all out, Mumba was ahead 24-16. However, from here Bengaluru started making a comeback and In the 10th minute, Mumba was again all out and took the lead in the match for the first time. The return of Bangalore was made single-handedly by Bharat, who had put up the third Super 10 of the season.

One and a half minutes before the end of the match, Bengaluru got Mumba all out for the third time and they had an eight point lead. Bharat took 16 raid points for Bengaluru. Guman put a Super 10 for Mumba, but could not avoid the defeat of his team.