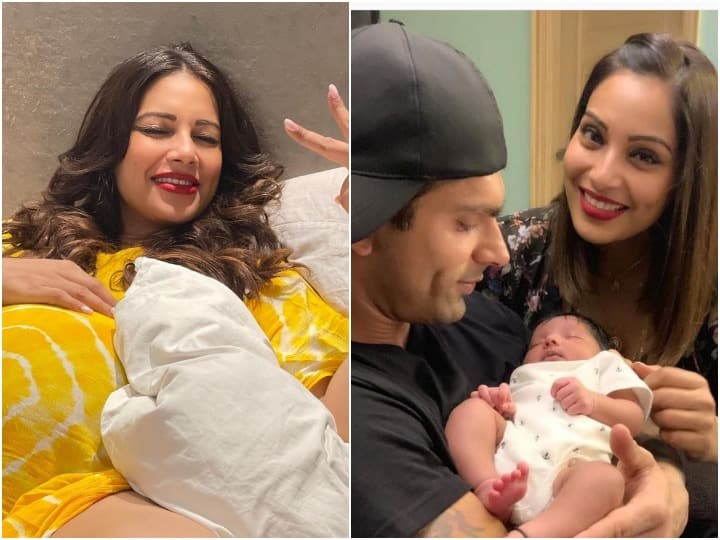 Bipasha Basu New Born Baby Pics Viral: Bollywood actress Bipasha Basu is pregnant and is going to be a mother soon. A few days back, the actress had given a baby shower, whose pictures became very viral on social media. In the midst of enjoying pregnancy, suddenly pictures of Bipasha with a newborn baby have appeared on social media. In these pictures, the actress is seen feeding the newborn baby with husband Karan Singh Grover. Seeing the photos, social media users are congratulating the couple openly. Fans feel that maybe Bipasha has given birth to a child. Fans are showering a lot of love on these photos of the couple.

Bipasha Basu and Karan Singh Grover are looking very cute with a newborn baby in their lap. The couple looks like new parents while lavishing love on the girl child. Although this girl is not of Bipasha, the actress has not given birth to the child yet. This baby girl in Bipasha’s lap belongs to actor Vivan Bhatena. Bipasha and Karan had gone to meet TV actor Vivaan’s daughter at his house as a surprise visit. This picture is from the year 2019 which was posted by Karan Singh Grover in 2019. However, now this photo is becoming fiercely viral after Bipasha’s pregnancy, and fans in the comment box are congratulating the couple for becoming parents.

Let us tell you that TV actors Vivan Bhatena and Karan Singh Grover have been good friends for a long time. Vivaan and his wife became parents after 14 years of marriage. That’s why Bipasha and Karan congratulated him by going home. Both Bipasha and Karan looked very happy and excited to meet Vivaan’s daughter. Karan had shared these very cute pictures with the girl on social media in the year 2019, while sharing the photo, the actor captioned, “It was great to meet this beautiful little angel today. Name is Nivaya. @vivanbhathena_official and @nichilapalat You guys did well!!”

Amidst Bipasha’s pregnancy, fans started commenting on this old picture of the couple. Users started congratulating the star couple. Most of the users are seen congratulating Bipasha on becoming a mother in the comment box, while some are praising her daughter by calling her super cute. Because of this, this picture has come in the discussion.

Also read-Urfi Javed Designer: This is the secret of the beautiful looks of Urfi Javed, know who is the designer of the actress?