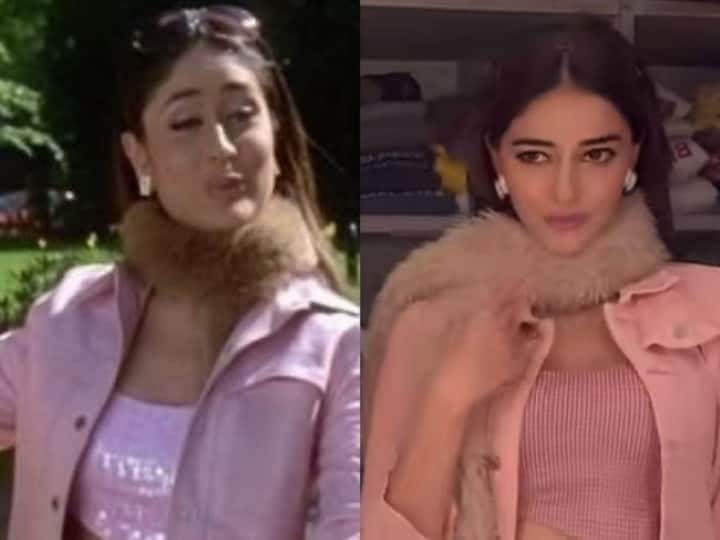 Ananya Panday Poo Look : Bollywood actress Ananya Panday is dominated on social media today. There are two reasons for the filtering of the actress, one is Ananya is celebrating her 24th birthday today i.e. on October 30 and the other is Ananya’s look at the Halloween party which is constantly in the news.

Ananya Pandey recently attended her friend’s Halloween party where the actress arrived as a ‘poo’ like Kareena Kapoor. You will remember that Kareena played the character of ‘Poo’ in the 2001 blockbuster film ‘Kabhi Khushi Kabhie Gham’, which is quite famous till date. Ananya chose this look for the Halloween party which has been doing the rounds on the internet since morning.

Ananya carried the ‘Poo’ look
Now the real ‘Poo’ i.e. Kareena has also reacted to this look of Ananya. Kareena Kapoor Khan has shared Ananya’s photo on her Instagram story, with which she has written a very funny caption. In the photo you can see Ananya is wearing a shimmery pink top and nude colored skirt. With this, the actress has carried matching shoes of pink and white color.

Kareena Kapoor reacted
Sharing a collage of two photos to Ananya, Kareena wrote, ‘Aap phat lag rahi hai’ (You Looked Phat) With this the actress has shared and wrote an eye-catching emoji. Happy birthday star, lots of love”. Let us tell you that after wearing this dress in the film, Kareena says a dialogue ‘Am I looking fat?’. Here Kareena has also praised Ananya in this style. Phat is a slang word that refers to ‘beautiful, warm and charming’.

Kareena Kapoor is in London with Jeh
Talking about the work front, Ananya was recently seen in two films ‘Gehraiyaan’ and ‘Liger’. Now the actress will be seen in ‘Kho Gaye Hum Kahan’ produced by Excel Entertainment. Talking about Kareena, actress Kareena is shooting for Hansal Mehta’s next film in London with her younger son Jeh. The film is a murder mystery and Kareena plays a detective in it.

‘You will not come to bail…’ Why did Munawar Faruqui say this to the new owner of Twitter, Elon Musk