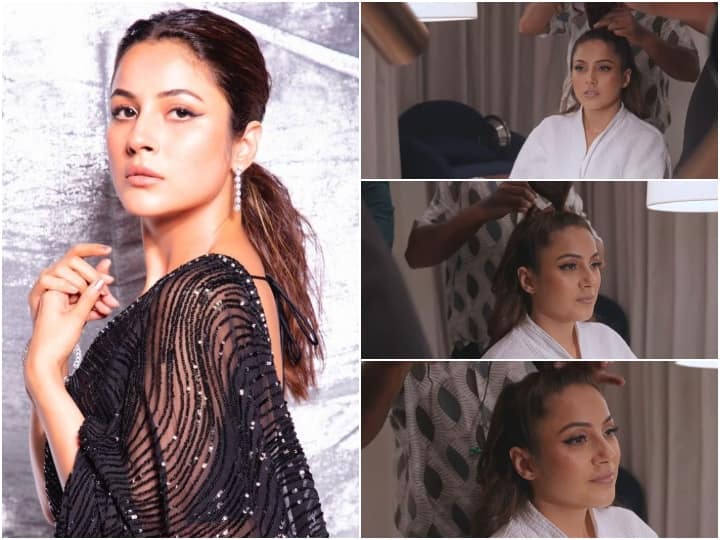 Shehnaaz Gill Video:: Bigg Boss 13 finalist, Punjabi singer and actress Shahnaz Gill is quite famous for her simple nature. She is very much liked due to her cuteness and her fan following is also very high. Often she keeps sharing her videos and pictures on social media, which fans like a lot. of Punjab itself Katrina Kaif Shehnaaz Gill, who said, recently went on a Dubai trip. Shahnaz has shared a vlog of his Dubai trip. In which she is seen getting ready for the event. During this, Shahnaz says that I am a natural beauty, I do not need makeup..

Shehnaz said that I am natural beauty
Let us tell you that actress Shahnaz Gill has shared a vlog of Dubai Stay on her YouTube channel. He attended an event there with many celebs like Kapil Sharma, Tiger Shroff, Sara Ali Khan. In the beginning of the video, Shahnaz is seen getting ready for an event with the help of her hair and makeup artist. Fans are very fond of the actions of the bubbly actress while getting ready. During this, Shahnaz says to her hair and make-up artist, ‘One, they tease a lot, man.. have to apply so much makeup to become beautiful. They do not know that I am naturally beautiful. I don’t need makeup. After this, she praises her makeup artist and says that I look good even after makeup because makeup artists are good.

These hairstylists do trials on small artists
Shahnaz teases her makeup and hair artist a lot, she says that they are doing trials on me. They feel that the dummy is sitting and they are learning right now because they try on small artists. It will work a little like this, what do they know how bright my future is going to be.

Fans are liking Shahnaz’s video
After this she reaches a star-studded event where Kapil, Tiger, Sara and many other celebs also perform. In this event, Shahnaz wore a multi-colored outfit with black socks and white sneakers. At the same time, the fans are very much liking this cute style of Shahnaz and her vlog is also being liked a lot.

Shahnaz is debuting in Bollywood
Talking about the work front, this girl from Punjab is going to debut in Bollywood soon. Let us tell you that Shahnaz Dil will be seen in Salman Khan’s film ‘Kisi Ka Bhai, Kisi Ki Jaan’. Venkatesh Daggubati and Pooja Hegde will also be seen playing important roles in this film. This film will be released in cinemas next year i.e. in 2023 on the occasion of Eid.

read this also:-Ram Setu Box Office Collection: Akshay Kumar’s ‘Ram Setu’ got a setback at the box office on the third day, did so much collection