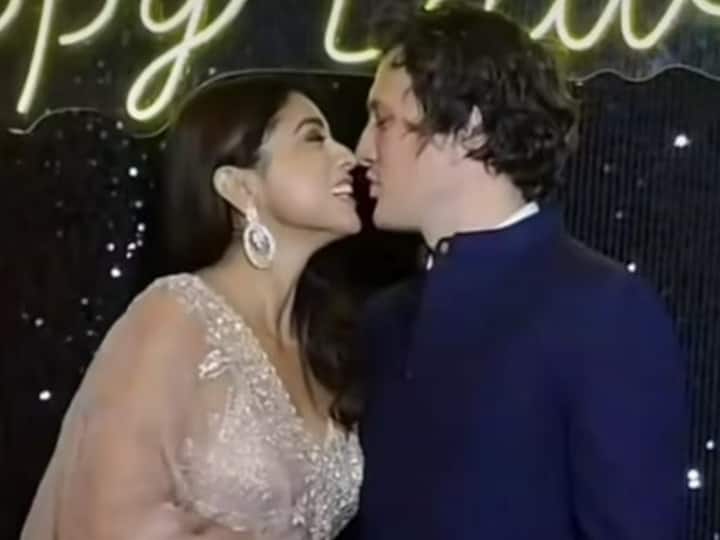 Shriya Saran Kiss VideoSouth and Bollywood actress Shriya Saran is in the news these days for her film as well as her personal life. These days, Shriya is attending Diwali parties being hosted in Bollywood with husband Andrei Koschev.

The actress first reached Taapsee Pannu’s Diwali party and last night at Kishan Kumar’s party. At the same time, now a video of the actress from these parties is becoming quite viral on social media. In the video, Shriya Saran is seen locking lips with her husband in front of Pap.

Shriya’s liplock video went viral
Actually, whatever Diwali party Shriya Saran is going to with her husband. At the same time, both are seen kissing in front of the camera. A video of this is also going viral on social media. In which she is looking very beautiful in pink color shimmery lehenga. At the same time, her husband is seen in a suit-boot.

In the video, both of them reach to pose for the paparazzi, when their husband says something to them in the ear, on which she becomes very happy and then both are seen liplocking. Let us tell you that this video, which is going viral, has now been shared by the actress on her Instagram story as well.

Users gave such feedback
On the one hand, where the fans are showering love on the videos of both. So on the other hand some people are also raising questions, a user commenting on the video wrote that, ‘Always see that they keep kissing each other.’ Apart from this, another wrote, ‘Yes, why is it really like this?’ While the third wrote, ‘It has started again, this is Diwali, not the reception party’.

On the work front, Shriya will soon be seen in the film ‘Drishyam 2’ with Ajay Devgan. The first look and trailer video of the film has also been released. Apart from this, many South films are also going to be seen.

Diwali 2022: Will be in Saif Ali Khan and Kareena Kapoor’s new house Diwali Celebrations, details related to the party surfaced