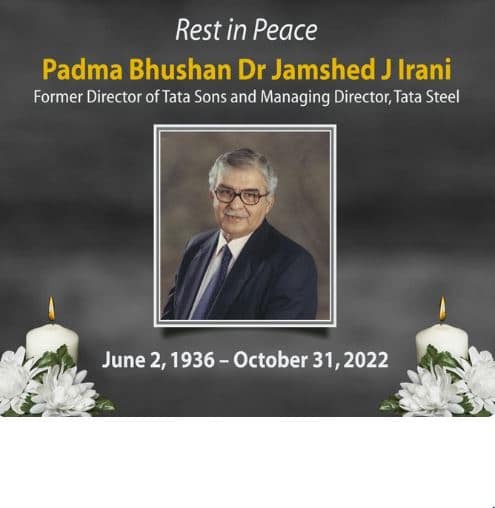 Jamshed J Irani Death: Jamshed J., former Managing Director of Tata Steel and known as the ‘Steel Man’ of India. died last night in Jamshedpur. He has left behind memories that show what a wonderful hand he was behind the strong position of the Tata Group today and his contribution to the country’s steel industry can never be forgotten.

How was Jamshed J Irani’s business journey
After educating abroad and starting a professional career, Irani returned to India in 1968 to join the Tata Iron and Steel Company (now Tata Steel). He joined the company as an assistant to the director in charge of research and development. Apart from Tata Steel and Tata Sons, Dr. Irani also served as a director of several Tata group companies including Tata Motors and Tata Teleservices.

Jamshed J Irani’s early life was like this
Irani was born on June 2, 1936 in Nagpur to Jiji Irani and Khorsed Irani. He completed BSc from Science College, Nagpur in 1956 and MSc in Geology from Nagpur University in 1958. He then earned his Masters and PhD in Metallurgy from the University of Sheffield, UK. He began his professional career with the British Iron and Steel Research Association in Sheffield in 1963. He returned to India in 1968 to join the Tata Iron and Steel Company (now Tata Steel).

Which honors did Jamshed J Irani get?
He also held the post of National President of Confederation of Indian Industry (CII) during 1992-93. He received many honours, including his appointment as an International Fellow of the Royal Academy of Engineering in 1996 and an honorary knighthood by Queen Elizabeth II in 1997. She was awarded the Padma Bhushan in 2007 for Irani’s contribution to the industry.

Tata Steel pays tribute
“He will be remembered as a visionary leader who led Tata Steel during India’s economic liberalization in the early 1990s and contributed immensely to the growth of the steel industry in India,” Tata Steel said. Tata Steel informed about the death of Irani through a tweet. He was 86 years old. Irani was associated with Tata Steel for more than four decades. He retired from the board of Tata Steel in June 2011, leaving behind a legacy of 43 years. Tata Steel said in a statement, “The ‘Steel Man’ of India has passed away. It is with utmost sadness that Tata Steel is informing about the passing of Padma Bhushan Dr Jamshed J Irani.” He passed away on 31 October 2022 at 10 PM at TMH (Tata Hospital), Jamshedpur.

Tata Sons Chairman N Chandrasekaran expressed grief
Condoling the death of Irani Tata Sons Of Chairman N Chandrasekaran Said that Irani was a quintessential person associated with Tata. He said, “He was a great corporate personality who contributed immensely to the steel industry. All of us at the Tata Group will miss Dr. Irani and we pray for his departed soul.
Tata Steel Of CEO And Managing Director T V Narendran Said Irani transformed the company in the nineties and made it one of the lowest cost steel producers in the world. Narendran said, “He helped build a strong foundation on which we developed in the following decades. He led with courage and conviction. He was a role model and mentor to many at Tata Steel.

Who is in Jamshed J Irani’s family?
Irani is survived by his wife Daisy Irani and their three children Zubin, Nilofar and Tanaaz.