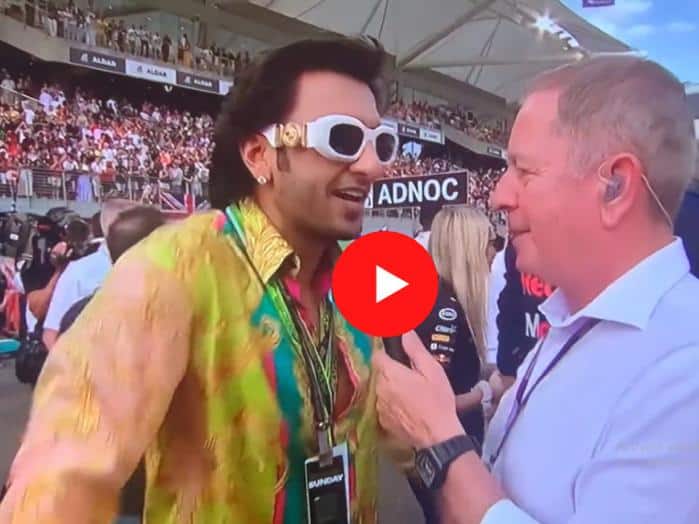 Ranveer Singh F1 Reporter Video: Bollywood actor Ranveer Singh is present in UAE these days. Ranveer Singh is well known for his cool style. Meanwhile, a video of Ranveer Singh has surfaced on social media. In which a media reporter clearly refuses to recognize the actor, but after that how does Ranveer deal with him. This is really worth seeing.

Reporter did not recognize Ranveer Singh

In this video going viral on Twitter, you can see that F1 reporter Martin Brundle is interviewing Ranveer Singh, but Martin does not recognize Ranveer. In the opening conversation, Ranveer Singh expresses his feelings with full enthusiasm and says, ‘I am very top class and cool in the world. But in between Martin says to Ranveer sorry I didn’t recognize you.

On this, Ranveer Singh replies to Martin Brundle in a simple and humble manner, saying, “My name is Ranveer Singh and I am an actor, entertainer from Mumbai. After this, Martin tells Ranveer that thank you that you have introduced yourself in this way. In such a situation, after watching this video, you can guess that Ranveer Singh is a down to earth person even in real life. Despite being such a big superstar of the film industry, he didn’t let that journalist get embarrassed and introduced himself in a comfortable way. ,

@RanveerOfficial you have killed it on the grid walk at the Abu Dhabi F1 #f1 #RanveerSingh #DeepikaPadukone #SkyF1 #martinbrundel #Bollywood #AbuDhabiGP pic.twitter.com/erOjPaptoU

People are giving such reactions