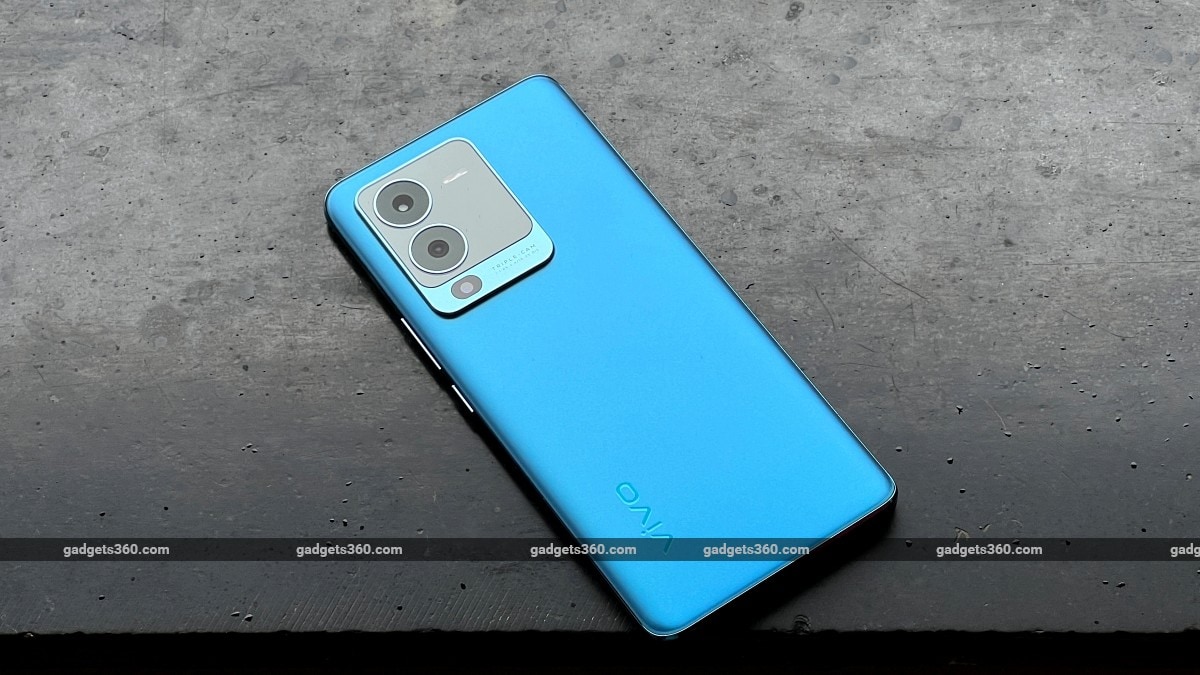 The Vivo V23 Pro 5G was a mid-range smartphone that was laser-focussed on design alone. Apart from being really slim and lightweight, it also introduced the colour-changing rear panel as a unique selling point for the series. What it also brought along was a noticeable jump in price, which was a lot higher than the Vivo V20 Pro 5G that it succeeded. The Vivo V23 Pro 5G offered mid-range hardware but at Rs. 38,990, was priced closer to devices that had much better specs.

With the V25 Pro, Vivo has made some subtle changes to the design, but has added some much-needed improvements when it comes to battery life and cameras. So, are these improvements worth the asking price, and does the Vivo V25 Pro succeed in offering something different?

The Vivo V25 Pro 5G has a design that reminds me of its predecessor, the V23 Pro 5G. However, the new phone is not as slim and a bit chubby at a thickness of 8.62mm. The chrome-finished mid-frame is made of polycarbonate with a glossy texture, and gathers fingerprints easily. However, it adds some grip to the otherwise slippery rear panel which is made of glass. The sides of the mid-frame are curved with the curved edge display and the rear panel seamlessly blends into the mid-frame, giving the phone a very premium feel.

The colour-changing rear panel of last year’s model surely caught everyone’s attention, but the trend did exactly catch on. The only other phone I reviewed that offered this feature was the Realme 9 Pro+ 5Gbut I was not a fan of the choice of colours. With the Vivo V25 Pro 5G, the colour-changing trick is hard to make out, mainly because the transition is more subtle, going from a lighter shade of blue to a darker one. It’s not as impactful as the gold to green transition of the Vivo V23 Pro 5Gso most users might not even notice that the feature exists.

Party-tricks aside, the V25 Pro 5G doesn’t feature an IP rating, nor does it have wireless charging. The rear camera module retains the metal frame from the V23 Pro, but has been redesigned with a glass inset to fit in the slightly altered imaging system. The 6.56-inch full-HD+ poLED display has a thin and uniform bezel all around that curves on the left and right sides, giving the phone a premium look.

The Vivo V25 Pro 5G packs MediaTek’s Dimensity 1300 SoC. The chipset is commonly found in mid-range smartphones and is also available in the OnePlus Nord 2T 5G and the Oppo Reno 8 5G, The phone uses LPDDR4X RAM and UFS 3.1 storage, but does not offer storage expansion. Communication standards include support for several 5G bands, Wi-Fi 6, Bluetooth 5.2 and support for the usual satellite navigation systems.

The phone is powered by a 4,830mAh battery and comes with an 80W charger in the box. Other box contents include a Type-C to Type-A USB cable and a transparent TPU case. The phone does not support NFC and the charging speed is limited to 66W.

The Vivo V25 Pro 5G runs Vivo’s Funtouch OS 12 which is based on Android 12. Everything feels typically Vivo, and this also applies to the superior customization options that the operating system offers. Vivo has added a new color palette picker which lets users pick between a basic preset color or a multi-colour theme, based on the applied wallpaper. While the UI color changes in the Settings app and the keyboard, the color of the widgets failed to change and needed a system restart to take effect.

I feel the software experience is something Vivo needs to work on, more so, given the price of this smartphone. An upgrade to Android 13 should hopefully pull the plug on these annoying notifications.

Software performance on the Vivo V25 Pro 5G was quite fluid. I faced no lag or stuttering when multitasking and everything worked buttery-smooth thanks to the 120Hz refresh rate display. The OLED display gets bright outdoors but produces heavily saturated colors at the default ‘Standard’ screen color setting. The curves on the sides of the display are not too excessive, so it is not distracting when viewing movies or playing games in full screen.

Vivo finally got rid of the dated-looking display notch which was present even on last year’s V23 Pro 5G. There’s now a hole-punch cavity for the selfie camera which does not get in the way of the viewing experience. There’s no stereo speaker setup, and the single bottom-firing speaker sounded a bit tinny and distorted at high volumes. The phone’s display is HDR10+ certified and content appeared as expected.

As for benchmarks, the Vivo V25 Pro performed on par with the OnePlus Nord 2T 5G but fell a bit short when it came to devices such as the Xiaomi 11T Pro 5G and the iQoo Neo 6, both of which pack in premium hardware. The phone scored 7,04,304 points in AnTuTu, and 678 and 2,770 points in Geekbench’s single and multi-score tests, respectively.

Gaming performance was quite good on the Vivo V25 Pro 5G. Most games ran smoothly at default settings and did so without heating up the phone. I tried out Call of Duty: Mobile and the phone managed to run the game smoothly at the ‘Very High’ frame rate and graphics settings. The phone’s frame rate priority mode helps make the gameplay appear smoother but it comes at the cost of resolution, which is lowered in order to achieve that steady frame rate.

The Vivo V25 Pro 5G performed a lot better than the slimmer V23 Pro 5G when it came to battery life. It was my major gripe with the previous model and I am happy to say that the V25 Pro does a much better job, easily lasting a full day with heavy use. This included an hour of gaming, some photography and a couple of hours of streaming, apart from the usual work-related messaging and scrolling through social media apps.The phone also managed to run for a good 19 hours and 32 minutes in our standard video loop test.

Despite packing an 80W charger in the box, Vivo limits the charging to 66W, which was fast enough to get the phone from an empty battery to 100 percent in an hour’s time.

The Vivo V25 Pro 5G has three rear cameras. There’s a 64-megapixel primary camera with OIS, an 8-megapixel ultra-wide-angle camera, and a 2-megapixel fixed-focus macro camera. Selfies are handled by a 32-megapixel front-facing camera which has autofocus.

In daylight, photos looked out a bit sharp but with good detail and dynamic range. Colors were oversaturated and almost appeared as though a filter had been applied to them. Photos from the ultra-wide-angle camera looked soft with lots of barrel distortion and purple fringing. These were also quite low on detail.

Portrait photos taken outdoors by the rear camera appeared sharp, but appeared soft when captured indoors. Selfies looked a bit overexposed, but selfie portraits had blown-out backgrounds in brighter shooting scenarios. Results from the macro camera were oversharpened at best and it was quite difficult to get an object in focus.

In low-light scenarios, photos captured in auto mode had average details in scenes with good light. The Night mode managed clearer images with reduced noise and slightly improved dynamic range, but also appeared a bit softer. Overall, photos shot in low light weren’t consistent and this changed drastically from scene to scene, depending on the available light. Photos from the ultra-wide-angle camera lacked detail with blotchy textures.

Videos recorded by the V25 Pro 5G looked average in terms of quality but showcased good dynamic range in daylight. At the same time, recorded videos just like the photos, appeared oversaturated. Footage shot at 1080p had a heavily cropped frame, which did translate to better stabilisation. Videos recorded at 4K 30fps managed the best quality with a wider frame but had a dream-like effect. The phone also shoots HDR video at various resolutions, but is limited to 30fps. The results were not too great with some flickering and added noise. Low-light video was average at best, the Night video mode did not make much of difference in dimly lit scenes.

The big question with the V25 Pro 5G is, why is Vivo still charging a premium for it? If it’s for features like the colour-changing back panel or the curved display, then I’m not sure how many buyers would actually be willing to pay a premium for such things. I feel Vivo really needs to rethink its pricing and strategy of its V-series, which up till the V20 Pro, was very appealing, Surprisingly, OnePlus managed to make better hardware choices and squeeze out consistent camera performance from its Nord 2T 5G, which is priced much lower starting at Rs. 28,999. In short, there’s nothing really special apart from that curved edge-display which helps the Vivo V25 Pro 5G stand out. And then, there’s the competition.

Despite having some solid improvements over its predecessor, the Vivo V25 Pro 5G is still hard to recommend when you have excellent alternatives in this segment,